Located in the heart of Downtown, Kingston the Waterfront and Kingston, Harbour has had a rich and evolving history. Its waters provided fishing for the Tainos; a port for the Spanish, a port and naval base for British pirates and naval forces from which they attacked the Spanish Main, and home and business district for Jamaicans for over three centuries.
‍
The Port of Kingston was established in 1692 after an earthquake destroyed Port Royal, and its survivors fled there. The earthquake survivors then set up their tented camp on the waterfront. Before then, the Port of Kingston was an agricultural center. The Port of Kingston did not really begin to grow until Port Royal was further damaged by a pirate-ignited fire in 1703.

Kingston's old port for close to 275 years was a series of finger piers which occupied the area along the waterfront from Wherry Wharf, which was to the west of King Street, and the Myers Wharf, also to the west of King Street. To the east,there was the Royal Mail Wharf; then Lyons Wharf; and right at the bottom of King Street, there was Henderson Wharf, where all kinds of hardware goods were offloaded. This gave way to the modern port of Kingston in the 1960s. All those wharves were finger wharves, meaning that they ran perpendicular to the shoreline out into the harbour. The ships would dock alongside to offload. At that time the depth at the wharves was thirty-six feet. 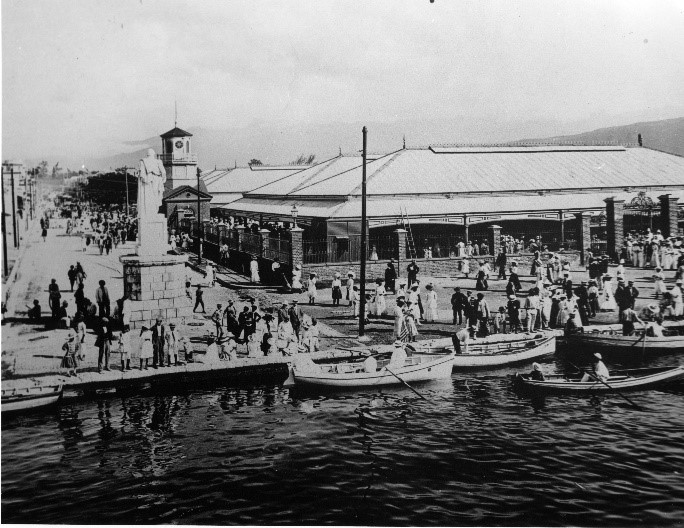 The Victoria Pierat the end of King Street was visited by cruise ships from the 1940s to the 1960s. This was where the HMT Empire Windrush departed on May 27, 1948. Opposite the pier was a market, later a crafts market, now the site of the former Oceana Hotel. This area has had a rich and vibrant history but over the years it has deteriorated and in recent years the Victoria Pier has been restored and now houses several restaurants and shops.
The Ocean Boulevard in recent time has been used for several large concerts and festivals such as the Dennis Brown Concert, Harbour Fest and the annual Fireworks on the Waterfront. It is evident the area is very dynamic and can be used for a variety of events and has the potential to attract both local and overseas visitors. It is through this that the Kingston and St. Andrew Municipal Corporation (KSAMC) has embarked upon transforming the space to have multiple attractions. The KSAMC is currently strengthening the sea wall along with creating a boardwalk which will be part of a larger plan to create a board walk which follows along the coastline of Downtown Kingston.

When people think of Kingston they think of reggae and dancehall. However, reggae evolved from its predecessors, ska and rocksteady and later gave birth to dancehall. Most of the popular names in Jamaican music were either from Downtown Kingston or recorded or produced music there. These names include Bob Marley, Peter Tosh,Bunny Wailer, Ken Boothe, Higgs and Wilson, Alton Ellis, Clement 'Sir Coxsone' Dodd, Duke Reid, Prince Buster, Marcia Griffiths, Rita Marley, Judy Mowatt, The Heptones, Bob Andy, John Holt, Dennis Brown, Horace Andy, Don Drummond, Lee'Scratch' Perry, King Tubby and many more. Downtown, Kingston is the home of Reggae and was declared UNESCO City of Music in 2018, and no better tribute to the music than having a Walk of Fame along the Downtown Kingston's Waterfront. A Walk of Fame which is expected to highlight the famous contributors to various genres of Jamaican music.

The Kingston Music City Walk of Fame will be located within the boardwalk along the Downtown Kingston Waterfront. Each medallion will represent a famous public figure or group within the Jamaican music industry. This may fall under several categories such as: Composer/Song writer, DJ, Producer, Musician/Performer and Musical groups. The medallions located along the board walk will be a permanent monument and each will have the name of the person or group inscribed in each.  Each medallion and every honor ceremony offers opportunities for sponsorship, licensing, merchandising and branding.  This ongoing publicity will extend the value of the City and the Walk of Fame.

Kingston’s Walk of Fame will be geared towards stimulating interest along the board walk and allowing for bringing in revenue, the sharing of stories of the city and the great Jamaicans who contributed to Jamaica’s world renowned music. The Walk of Fame is expected to be interactive and include an augmented reality feature which will allow visitors to gain background knowledge of each person or group which has a medallion along the walk of fame.
‍
This new 24 HOUR free attraction will boost tourism, engage pedestrians, enhance economic development, give the sense of open space and increase local pride.This will have multiplier effects for areas such as tourism, Downtown's improvement and by extension the people of Jamaica.

Major corporations have already shown interest in sharing in the excitement of redeveloping the Downtown Waterfront. The Music Walk of Fame will be a fun tourist attraction that will bring smiles to peoples’ faces and rewards for everyone involved.